UPDATE: “Kid’s Company,” described below in this April 2014 post, was shut down by British officials in the summer of 2015. Read why here. 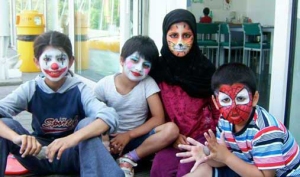 In discussion during his delivery of the Tanner Lectures on Human Values at Harvard University on April 8 and 9, 2014, Rowan Williams, the former Archbishop of Canterbury (now Master of Magdalene College, Cambridge University) took a moment to name and praise the work of Camila Batmanghelidjh, founder of Kids Company in South London. This “wildly colorful” woman whose energies give hope to over 36,000 troubled youth, was the force behind an extraordinary exhibit at the Tate Modern (artgallery) in 2004. Learn more about her work at the Kids Company website. She is author of Shattered Lives: Children who Live with Courage and Dignity (London and Philadelphia: Jessica Kingsley Publishers, 2006).

This entry was posted in Educational resource, Web resource. Bookmark the permalink.